On September 14, 2022, the water system of Nolhivaranfaru in Haa Dhaalu Atoll, was inaugurated. This project, which has been ongoing since 2018 with a budget of  MVR 36,321,012.36 with the assistance of the Green Climate Fund and the Government of the Maldives and the United Nations Development Programme (UNDP) was finally completed in February of 2022.

This project consisted of establishing two 45-ton plants with the capacity to produce 90 cubic meters of water per day, a 300-tonne tank to store water and a water network of 16.7 kilometres.

Why these water systems are so important to Maldivian islands

This issue only got worse as the island developed and the population increased as the demand for water increased with the supply depleting. In addition to this, the tsunami that hit the Maldives in 2004, which flooded all but nine islands in the Maldives caused several islands' fresh water lines to turn completely salty. And while many expected the waterline to return back to normal after a few months or a few years, the waterline never returned back to its original state.

Following the 2004 Tsunami, UNICEF provided 18 mobile desalination units to the Maldives as a relief effort, which turns seawater into fresh water. Each unit is capable of supplying more than 10,000 litres of fresh water in an eight-hour day via a process known as ‘reverse osmosis' - enough for 500 people at an average consumption of 20 litres per day.

While this solution became common in the capital city as most houses use a combination of desalinated water and salt water that is still accessible from the ‘freshwater line’, it is less common in islands which still rely solely on the waterline.

However, as water lines in local islands have also started getting worse throughout the years, a long-term solution is needed all over the Maldives. While in most local islands rainwater is collected in tanks for drinking and cooking, with the water becoming too salty to even farm crops, many agricultural islands are facing difficulties in watering their crops.

The negative effects of climate change are a harsh reality that Maldivians are facing as sea levels continue to rise, causing water pollution all over the Maldivian islands, leading to long-term solutions such as water systems being built becoming increasingly important to the Maldivians' livelihood and economy with each passing year. 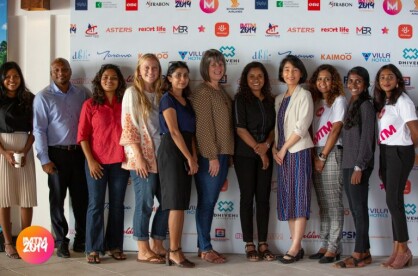